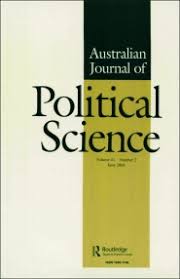 My latest article is just out in the Australian Journal of Political Science. “Connective Action Mechanisms in a Time of Political Turmoil: Virtual Disability Protest at Donald Trump’s Inauguration” examines the forces that underpin the rapid formation of online counter-publics in the wake of disruptive political events such as Donald Trump’s election. Both the advantages and disadvantages of connective action as a response to this type of political upheaval among traditionally marginalized populations are discussed through a case study of virtual disability protest at Donald Trump’s inauguration (the “Disability March“). This article is part of a forthcoming special issue edited by Ariadne Vromen (University of Sydney) and Andrea Carson (University of Melbourne) for the Australian Political Science Association’s POP Politics Aus Group. Please contact me if you need a link to a free copy of this article. Here is the abstract:

This paper explores the connective action mechanisms that underpin the rapid formation of online counter-publics in the wake of disruptive political events through a case study of crowd-sourced disability protest launched in response to Donald Trump’s election as U.S. President. Coverage of this protest in U.S. news media is reviewed also as a first step towards assessing the ability of this initiative to influence public discourse. Findings suggest that controversial election results can spur mobilisation, but by themselves do not appear to be sufficient for connective action to really flourish and succeed. Personal action frames that typically are central to connective action struggled to emerge in crowd-sourced contributions that focused on Trump and his politics. The reasons behind these outcomes and their implications for the potential effectiveness of crowd-sourced protest are discussed.